Were you looking for Aline Cedrac (Film version), from the first Alone in the Dark film?

Aline Cedrac is a young ethnology professor that is accompanying Edward Carnby to Shadow Island.

Aline Cedrac was born on June 30 1974 in Leamington, a suburb Of Boston. She works as an ethnology Professor at Boston University. Aline never knew her father, and her mother, Marie Cedrac, would never reveal his identity to her. A Frenchwomen, Marie returned to Europe in 1992 after quarrelling width Aline, her only child. Aline stayed in Boston to finish her ethnology studies. Alas, Aline never saw her mother again - Marie died in a train crash in February 1993. Despite her search, Aline has never discovered her father's identity. Aline proved to be a brilliant student. Her amazing memory along with her extraordinary intuition and strong will helped her gain a Ph.D. in ethnology age 24. She focused her study on the Abkanis Indian tribe. The recent discovery of the tribe's writing system dating back several thousand years by Obed Morton revolutionized the small world of Indian anthropology and inspired her upcoming hook, which is funded by a grant. Aline has gone to Shadow Island to retrieve the Abkanis Indian tablets from Obed Morton. She is there to also confirm if Obed Morton is her father due to Frederick Johnson’s information.

Aline is a determined and impassioned young woman. Life's trials and tribulations have made her very independent. She is hard on herself and curt toward others. Personal relationships with men are of little importance to her. Aline's good looks give her a confidence that sometimes appears condescending. She feels that she has not met a man that deserves to be with her.

Aline visits Shadow Island for two reasons: She wants to work together with Obed Morton on translating Abkani-tablets and also wants to find out if Obed Morton could be her father. After Johnson showed her a photo of her mother and Obed Morton, Aline thought about that possibility. In October 2001, Aline is on a plane to Shadow Island with Edward Carnby when the plane is attacked by some flying creature and crashes. Edward and Aline are forced to parachute out of the plane and land in separate parts of the island. They can still communicate using walkie-talkies.

Aline lands on the roof of the Morton estate and can enter the manor immediatly. She can use her flashlight to discover objects, documents and items and scare shadow creatures away. Light is an important “weapon“ against a lot of monsters on Shadow Island. Aline also gets weapons during the game and can shoot enemies, but because ammo is limited it‘s often a good idea to use the flashlight or search for a lightswitch to turn the light on.

Aline is a young professor who is deeply passionate about his job and Abkanis' culture. Her interest is so deep that, even during her time in Shadow Island, she can be distracted by Morton's collection of Indians' manufactured. She has vast knowledge of Abkanis' culture, and can understand and translate their writing with minimal to no effort. Even due to this, she is the first to take seriously Edenshaw and his worlds, being very surprised an Abkanis is still alive.

During her dangerous adventure in Shadow Island, Aline shows to be very scared, and gets nervous and proved by the horrors inhabiting the dark place, even being aggressive towards Carnby. However, after few time, she quickly adapts, and starts to face the dangers more and more fiercely, even refusing to leave the island without getting what she comes for, and deciding to investigate by herself, pointing to Carnby they don't have the same goals. Despite having their contrasts, Aline respects Carnby, and their teamwork proves to be quite efficient as they progress during their investigation.

Aline has a certain interest in Professor Obed Morton, as his Abkanis' tablets, and she is very determined to meet him, actually this being the main reason she reaches Shadow Island. While firstly it looks to be just respect for Obed's job and research, it is ultimately revealed she believes he is her father, that she never knew. When she discovers this belief was the result of Johnson's manipulation, she gets very angry and slightly vengeful towards the man, even slipping him at the end despite Johnson rescues her and Carnby and save them from Shadow Island. 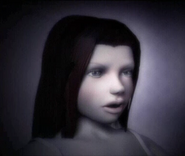 Add a photo to this gallery
Retrieved from "https://aloneinthedark.fandom.com/wiki/Aline_Cedrac?oldid=22455"
Community content is available under CC-BY-SA unless otherwise noted.