Life is a Hideous Thing was comic book story that acts as a prequel to Alone in the Dark: The New Nightmare game. It was published in France by Semic comics in 2001. it was eventually translated to english by the USA in September 2002.

The story centred on Edward Carnby (of the New Nightmare continuity) and the newly introduced Aline Cedrac who were both on a trail of a mysterious conspiracy in Tibet.

In 2001, anthropology professor Aline Cedrac found in a compartment of the safe that belonged to her unknown father some documents including an ancient map. Determined to shed light on the identity of the unknown relative, she travels to India with her colleague Frank Stone, following the indications on the map that would seem to lead to Aggartha. At Sikimm they look for the antiquarian Ganesha and, after having escaped some traffickers of treasures at the market, they meet him at their hotel and convince him to guide the expedition in search of the lost kingdom. Meanwhile, private investigator Edward Carnby is sent by his colleague Charles Fiske at the airship of Dr. Leng, in Nepal, for information on the Crown of Genghis, an ancient artifact used by Genghis Khan to conquer China and then handed over to Marco Polo, who delivered it to the sages of Aggartha. Carnby intends to destroy the Crown, convinced that a sect devoted to darkness known as Kun-Yin wants to take possession of it to unleash a dimensionless creature during the Hour of the Scythe (a particular alignment of the stars): the growing chaos . Meanwhile Aline, Stone and Ganesha cross the Nepalese mountains managing to find the entrance of Aggartha where they are then attacked by the Mi-Go, of the abominable Yeti who kill some of their bearers and surround them. The group is saved by Carnby's intervention, who makes the Mi-Go flee using signal flares and all together take refuge at the Aggartha temple. There the investigator explains that the Mi-Go are none other than the Yian-Ho, the wise and civilized people of Aggartha, changed over the centuries due to the dark influence of the Crown of Genghis.

The following day, thanks to the indications on the map of Aline, the group entered the temple and managed to find the crown; at that point Frank Stone precedes the others and wears it revealing one of the Kun-Yin: his plan is to reach the Heart of the World from which to evoke the Growing Chaos during the Hour of the Scythe . Then he unleashes the Rakashas, ​​demonic guardians of the Crown, against the group and runs away; However, Aline uses her extraordinary linguistic knowledge to distract the creatures and to convince Mi-Gos who have come to the scene to help them stop Stone. Ganesha then leaves the group to save his life, while Carnby and Aline are led to the Heart of the Worldfrom a Yeti. The detective explains that Aggartha was built around a particular natural phenomenon: an upward pointing magnetic fulcrum which Fiske hypothesized could be a sort of "lighthouse" to communicate with other worlds; from that particular point, placed in the center of Aggartha, it is possible to evoke the Growing Chaos. He also speculates that the map of Aline's father can be traced back to the Last Thule, the Nazi expedition that sought that lost continent. Reached the Heart of the World, the two confront the Aggartha flora and fauna, grown abnormally due to the particular magnetism, and confront each other with Stone. He manages to hit both Carnby and the Mi-Go, finally evoking the growing chaos. It is therefore Aline who kills him, using a spell found among his father's belongings, removing the crown and then trying to close the crack from which the growing chaos is descending on the earth plane. Thanks to the intervention of Ganesha, returned to help them, the three repel the cosmic horror and return to the airship of dr. Leng. Here Carnby is summoned to have bad news about Fiske while Ganesha, jokingly, proposes to Aline to marry him.

Edward Carnby: Boston private investigator. Paranormal expert, he is sent to Nepal by colleague Charles Fiske to find and destroy the Crown of Genghis, given the approach of the Hour of the Scythe , before the Kun-Yin.

Aline Cedrac: Professor of ethnology at the University of Boston. After finding an ancient map in a secret compartment of the safe that belonged to his unknown father, he decided to undertake an expedition between India and Nepal to find Aggartha so as to discover information on the identity of his father.

Frank Stone: Aline's colleague at the Boston Museum, accompanies the girl on her journey to Aggartha. It is actually one of the Kun-Yin, its goal is to find the Crown of Genghis in order to evoke the Growing Chaos.

Dr. Leng: Mysterious Asian who resides in a kind of flying ship, he seems to know both Carnby and Fiske well, collaborating with them. Reference is made to the 'Void-which-consumes' a power or entity that he could free, so powerful as to confront the Growing Chaos.

Rakashas - statue guardians of the Crown of Genghis, turned to life with the power of the crown 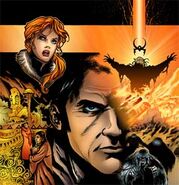 Add a photo to this gallery

To the Cthulhu Cycle: Edit

The comic title was named after the first part of a quote from HP Lovecraft's story, "Facts Concerning the Late Arthur Jermyn and His Family".

Retrieved from "https://aloneinthedark.fandom.com/wiki/Alone_in_the_Dark:_Life_is_a_Hideous_Thing?oldid=23550"
Community content is available under CC-BY-SA unless otherwise noted.