Alone in the Dark (shortened to AitD) is a survival horror game released by Infogrames in 1992 for PC. In 1994 a port was made for 3DO by Krisalis Entertainment and published by Interplay Entertainment.

Alone in the Dark is one of the first Survival Horror games and one of the first games to utilize 3D models superimposed on pre-rendered backgrounds. The game was awarded the title of 'First 3D survival-horror videogame' by Guinness World Records.

Gameplay revolves around combat and puzzle solving within Derceto Manor. The player can choose to assume the role of either Edward Carnby or Emily Hartwood.

The player collects items around the mansion to solve puzzles and interact with their environments by selecting actions in the menu.

It is the year 1923. The owner of the Louisiana mansion Derceto, Jeremy Hartwood, died a few days ago. The police report, filed after a cursory investigation, concluded that the well-known artist had taken his own life. His devoted butler confirmed that Hartwood had been suffering from considerable mental depression for some months. He had placed even more strain on his already delicate health by translating the many ancient manuscripts contained in Derceto's extensive library. He also suffered from insomnia and the few hours of sleep he had were troubled by particularly disturbing nightmares. He appeared to be convinced of a mysterious presence in the old house.

Derceto is now empty. Rumors abound of a curse or of an evil power dwelling within its walls. Such stories are not uncommon with houses like Derceto, especially in this particular area. For some days now, however, a cloud of doubt has hung over your mind...

What are those strange lights inside the house during nightfall? What could account for the eerie noises to be heard each time you approach? Why did Jeremy commit suicide? What compels you towards the house? What is Derceto‘s terrible secret?

Depending on which character is chosen, a small backstory is provided before the introduction. Except for the opening and a small text in the living room, gameplay is the same to both characters.

Seconds after the presentation and introduction cutscene, the game allows the player to take control of the selected character in the loft. Monsters will make their first attack, the player must then progress through the house, fighting off various creatures and other hazards in the house, including a whole staff of staggering zombies and various monsters, booby-traps and arcane books, in order to solve the mystery of Derceto and find a way out.

On my door, a dull brass plate says "Private detective". The few friends I have call me Carnby; the others call me the Reptile. I don't care to think what my banker calls me. These days, I leave my letters unopened; bills and threats to send in the receivers just ruin my day. When an antique dealer called Gloria Allen contacted me, I slipped into my best shirt, holstered my .38, and got to her shop as fast as I could. I was expecting something sordid: blackmail probably. Boy, was I wrong! What I was asked to do was visit a property called Derceto and find a piano in the loft. It was an old piano, with secret drawers; the kind people who buy stuff in antique stores go crazy over. The Derceto house is supposed to be piled high with classy junk: furniture, books, paintings. It looked like whoever owned Derceto was about to get cleaned out. I was going to bring up the subject of money when Gloria Allen handed me $150 and a key. I kept myself from grinning at the thought of my banker's surprise. He doesn't like his victims getting away. I looked over a copy of the police report. The former owner of Derceto, a guy called J. Hartwood, had hanged himself in the loft. The coroner concluded it was a clear-cut case of suicide. I promised Gloria Allen I'd give the place a look-over. My report will be ready in a couple of days. I've been reading up on the history of the old house; it's the kind of place ghosts run away from in terror. Grisly murders, curses, lunacy... Luckily, devil-worship makes me smile, so this is my idea of a paid vacation.

The attorney's letter came as a deep shock to me. My uncle Jeremy had died by his own hand! The coroner's report was unequivocal: he hanged himself in the loft. My initial surprise and distress past, I considered the news; it seemed clear that Derceto had exercised a thoroughly morbid influence on my uncle's mind. That creaking old mansion, with its unusual tales, its secret library door, the ancient upstairs clock, all those occult books that my uncle could not resist reading, in spite of his fragile nerves... Fate had pointed its finger. Derceto had trapped its prey. Mr. MacCarfey, the family lawyer, suggested selling the old house; I immediately opposed the idea. My duty is clear: I must go to Derceto. I tremble at the thought of those dark corridors, those brooding portraits. Yet I am convinced that uncle Jeremy left a note, a letter of some kind, explaining his fateful decision. I remember his voice saying, "Look at the piano, Emily... Look harder." Maybe the secret drawer will yield up an explanation. I have the feeling things will not be so simple. Life is a mystery, containing more mysteries. Jeremy taught me that much. Now is the time to confront the mysteries. Derceto is waiting for me. I pray that my fear is nothing more that the fruit of my imagination. Nothing will ever persuade me that my uncle was insane. But why did he, according to the police report, block the loft window with the old wardrobe?

Differences between the versions

The first edition was published for MS-DOS floppy disk, in 1993 was released on a CD-ROM which included a dubbing of dialogues and a digitized version of the soundtrack; other conversions are available for Macintosh, for 3DO and FM-Towns. In Italy, the first version of Alone in the Dark was published allegedly by CTO in 1992 and distributed on four 3.5-inch floppy disk, the entire game has been subtitled in Italian. Along with the game it was also an envelope containing a copy of the fictional newspaper The Mystery Examiner, fully translated and a book of codes for anti-piracy protection to be inserted at the beginning of the game. The second Italian edition of floppy disk possessed a completely new packaging than the first edition, also was including a floppy disk bonus containing the spin-off Jack in the Dark, but was removed the copy of Mystery Examiner, as the exclusive preserve the first edition floppy. A third version, this time in CD-ROM was always published in 1993 by CTO, the edition available to the English dubbing and subtitles in various languages, including Italian. 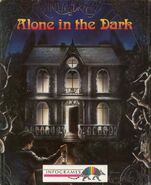