Alone in the Dark 2

Alone in the Dark 2 is the second installment of the series and a direct sequel to the original game.

It was announced by Infogrames in 1993, via a minigame called Jack in the Dark, that when finished, showed screenshots of the game.

It is Christmas of 1925, three months after Alone in the Dark. "Supernatural Private Eye" Edward Carnby and his partner Ted Stryker are investigating the kidnapping of young girl Grace Saunders. The trail of clues leads to an old mansion named Hell's Kitchen - the home of infamous gangster One-Eyed Jack and his gang. Edward decides to pick up the trail when he learns of Ted's disappearance. When he soon finds out that Ted has been murdered, he goes even further on the case.

Carnby eventually finds out that the mobsters are pirates that plundered the seas hundreds of years ago. Fighting his way into the house and ultimately onto a pirate ship hidden in the cliff on which Jack's house is built. Edward must rescue Grace and find out why the pirates have taken an interest in her.

The game mechanics were updated, allowing actions, such as aiming and running, to run more smoothly.

Alone in the Dark 2 received mixed reviews. Most of the critics considered it a good game, but still not a good sequel, as it was a lot less scary, with a much faster pace and an overly difficult gameplay, turning the game to the action/adventure genre, which wasn't well received by most of its fanbase.

The PlayStation and Sega Saturn versions were roughly criticized. Despite the fact that these versions are updated with texture mapped models, the graphics were still considered outdated compared to other games released around the same (namely Resident Evil). Its awkward controls, which weren't an issue years back on the PC but were then considered inconsistent and non-intuitive by most console players, didn't help either. 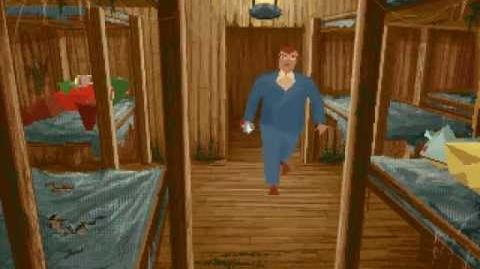