Crowley is the main antagonist of 2008's Alone in the Dark. He is a Luciferian as well as an influential and ruthless occultist obsessed with obtaining the Philosopher's Stone and experiencing the subsequent Path of Light. His full background is unknown, although his proper name may be Mr. Bungle, although this may be just another alias.

Much of Crowley's past is unknown. As an occultist, he studied the legend of the Philosopher's Stone, and became obsessionated with it. Along with his men, he hunted the man believed to possess the magical artifact, Edward Carnby. After having succesfully kidnapded the former detective, he did the same with Theophile Paddington, Cranby's former student, and forced him to release Lucifer from Edward's body, not caring for the threat he was exposing the mankind to.

After the ritual is successfully celebrated, Crowley orders one of his men, Scoff, to excort Edward on the roof and kill him. He instead, with the other henchman, Hammet, excorts Theophile in an elevator, and try to intimidate the man so the latter face the Path of Light at his place. During the voyage, however, Lucifer's forces attack the trio, kidnap Hammet and destroy the elevator, forcing Crowley to leave and let Theophile Paddington free.

Crowley then mocks Edward at the phone, revealing to the amnesiac detective his name and sending him a message with a story about a group of nazists discovering a strange power during World War Two in an ancient monastery. Using an helicopter, Crowley continues to hunt Edward, saving him by the Dark Liquid, in exchange of the Stone. While Edward tries to force him to reveal him more about the prophecy, and Crowley to get the stone, a giant Vampiriz attacks the helicopter, causing both to crash and fall to the soil. Both Carnby and Crowley survive, but Crowley escape again.

Crowley tries for the last time to get what he wants just before Edward can face the last test of Lucifer's door. He holds Sarah Flores as a hostage, and tries again to threat and blackmail the detective. Edward, by contrast, magages to shoot him in the head, killing him.

In the PS2 and Wii versions Crowley is called Mr. Bungle, and his role was more minor, although it is hinted that works for or is the leader of a sect known as the New Alchemists. After surviving the collapse of the elevator in the New York hotel, he made contact with other assassins to reach the Belvedere Castle in Central Park and follows Edward and Peter Eddington (student and friend of Theophile Paddington) by car. The two, however, manage to lose them and to get to Belvedere Castle, where begins the Path of Light. Peter, however, prefer to wait outside where it is joined by the New Alchemists and presumably killed. It is unknown what was the fate of Crowley / Mr. Bungle.

Crowley is a selfish and megalomaniac man, who force Theophile Paddington to release Lucifer from Edward's body so he could get the Philosopher's Stone for himself, not caring at all of the danger he was exposing the whole mankind. His pride is clearly proved when he even refuses to talk about the prophecy, saying the Stone deserves something more of something so ridiculous, and that he is born to have it. He is also quite spiteful and merciless, as, when Lucifer is releases from Edward, he immediately order the detective's dead, as the man is nothing but rubbish once he is no more useful for Crowley's interests. Crowley is also a coward, as he holds Sarah as a hostage to blackmail Edward and tries to force Paddington to be the Light's bringer so he could get the Stone's power withou any risk for himself.

Crowley is a normal man: a single shot in the head is enough to kill him. However, if Edward doesn't do it until a certain time, Crowley can shoot and kill him instantly, without any possibility to avoid it. 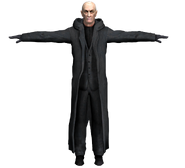 Add a photo to this gallery

Retrieved from "https://aloneinthedark.fandom.com/wiki/Crowley?oldid=22545"
Community content is available under CC-BY-SA unless otherwise noted.