Alone in the Dark Wiki
Register
Don't have an account?
Sign In
Advertisement
in: Characters, Enemies, Villains,
and 3 more
English

Ezechiel Pregzt is the main antagonist in Alone in the Dark. The player fights him twice, once in the Drawing Room as a Ghoul, and again in Pregzt's Tomb as a spirit trapped in a tree.

Pregzt is also mentioned in Alone in the Dark 2, 3, and Illumination.

Ezechiel Pregzt was presumably born near the beginning of the seventeenth century. He eventually became a pirate known as Ezek the Bloodthirsty, captain of the ship Astarte and grew to be famous for being particularly sadistic and brutal. Sowing terror across the seas and traveling throughout the world, he likely became interested in the occult and black magic during this time. In his more recent years, he had a relationship with the voodoo witch named Elizabeth Jarret, with whom he had a son named Jedediah "Jed" Stone.

In 1620 he is processed by a Welsh court, but manages to escape a hanging and heads to Florida where he continues to practice black magic rituals, human sacrifice and voodoo, after which the boardings of the Astarte became even more profitable. Years later Pregzt is again on trial, this time by a court of a gang of pirates who accused him of not "paying his share to the brothers." The hanging took place, but thanks to his developed occult powers, Pregzt rises and heads back to Florida with his crew, looking for a complex of underground caves where he could continue his blasphemous rituals, leaving the ship at New Orleans and traveling deeper into the swamps accompanied by several men carrying heavy trunks. Two days later they heard screams and gunshots from the swamps, eventually Pregzt returned to the ship accompanied by a black man who introduced himself as Keith, claiming that the others were all eaten by alligators. Then he divided his loot between them all and left the Astarte to his companions Elishah Smith and Elie Hell before abandoning the life of a pirate.[1]

In the following years he took to worshiping the mysterious stones and became further involved in his dark cult, dramatically increasing his powers in the complex of caves he found. In 1818, he assumed the name of Eliah Pickford and bought the lands of a certain Ledoux to build a huge house with a basement that was connected to the maze of underground passages where he practiced black magic and also filled the house with blasphemous manuscripts on occult rituals. He also named the house Derceto in honor of his old pirate ship and crew.[2]

On June 17th, 1862 Union soldiers in Louisiana found themselves arriving at Pickford's plantation; Pickford then invited Captain J.W. Norton and his lieutenant Patterson to dinner in an effort to use them in its rituals. Norton, who realized the danger, managed to fire three shots into Pickford in the clash and the soldiers then set fire to the whole plantation; the Pickford slaves, however, managed to extract the body of their master from the house in flames, then later infused his soul inside a tree in the basement of Derceto.[3]

In 1875 the villa was bought and restored by Howard Hartwood, who is highly passionate about the history of Pickford, eventually coming to realize his past as a pirate.[2] Pregzt, at that point, needed a new body in which to inhabit and tried to take over Howard's, manifesting himself in nightmares and trying to draw him to the basement. At the entrance of the caves, however, Hartwood bit off his tongue in a last ditch attempt to resist Pickford, dying due to being suffocated by his own blood after the attempt on his own life.[4]

Derceto then passed to Howard's son Jeremy who, in 1924, began to suffer from the same grotesque nightmares and hallucinations as his father, seeing Pregzt in the guise of a "dark man". The occultist freed his undead slaves and infernal creatures summoned from other dimensions in order to bring Jeremy to the basement, but Jeremy sensed the danger coming and hung himself in the attic villa in August of that year, again preventing the undead pirate from coming into possession of a new body.[4][5]

When Edward Carnby or Emily Hartwood went to Derceto in 1924, Pregzt orders his slaves to take the visitor to him so he may revive himself.[6] However, the visitor found Pregzt's tomb and managed to destroy him.

Pregzt acts as both Midboss and Final Boss of the first game. Pregzt also controls all of the monsters in the game and sends them after the player.

The first form Pregzt appears in is a Pirate Ghoul. Only the Cavalry Sabre or the Knight's Sword are able to damage him. He is able to block bullets, arrows and thrown weapons, and punching/kicking does no damage. The best tactic is to corner him and attack with alternating stabs. Doing this prevents him from attacking.

Each of his attacks do 6 damage. Upon death, he drops the key to the ballroom.

The final boss of the game is Pregzt's soul bound to a tree, where it sits stationary in a pool where Deep Ones spawn. The tree shoots fireballs at the player. He can only be defeated by placing the Talisman on the cover stone of Pregzt's sarcophagus, making him vulnerable, then throwing the (lit) Oil Lamp at him. A cut scene will begin and all other enemies will vanish.

Because Deep Ones can not be killed, and the fireballs do not home, the best tactic is to rush to the tree and quickly finish him off.

Pregzt in the Game Over screen 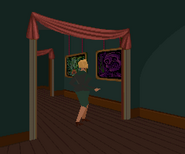