Alone in the Dark Wiki
Register
Don't have an account?
Sign In
Advertisement
in: Alone In the Dark II Stubs, Characters, Playing Characters,
and 4 more

Grace Saunders first appeared in the promotional prequel Jack in the Dark, in which she is trapped in a toy store during Halloween, where she has to save Santa Claus from the toys lead by an evil Jack-in-the-Box named Jack in the Dark.

Events of Jack in the Dark[]

It's Halloween and Grace Saunders is lost in the big city, until she finds herself trapped in an empty Toy Store with all toys having come to life, all being lead by Jack in the Dark, an evil Jack-in-the-Box.

In the game, Grace was kidnapped by One-eye Jack and his gang in order to continue their immortality and "age" in their place.

If Grace falls down the hathway on the flying dutchamn, she would use a green parasol to glide down.

"thesaunderschild" is a famous Internet person.

"Carnby told me it might come in handy." (referencing the Captain's Staff)? 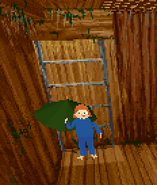