Alone in the Dark Wiki
Register
Don't have an account?
Sign In
Advertisement
in: AITD (2008) stubs, Characters, Deceased Characters,
and 2 more

Hamlet was a henchman who, along with Scoff, worked for Crowley.

Scoff, along with Hamlet were interrogating an abducted Theophile Paddington and Edward Carnby, who was previously unconscious. While Scoff was checking his consciousness with the use of a torchlight, Hamlet was beating Crowley.When Crowley arrived, Scoff was ordered to take the drowsy Carnby up onto the rooftop to shoot him, while he and Crowley take Theo to the elevator. Ultimately, Hamlet's fears tragically realize, as the fissures attack the trio and is kidna and corrupted in one of the Humanz. He then, as one of Lucifer's puppets, attack Edward, and is finally killed and destroyed.

Scoff attacks and react as a standard Humanz. 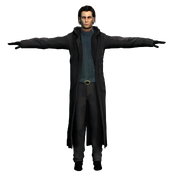 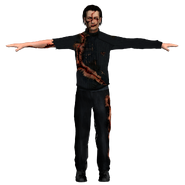