Jedediah "Jed" Stone is the primary antagonist in Alone in the Dark III.

He was raised as an orphan, who suddenly went missing in 1837, during a fire in the San Juan estate.

He is believed to be the son of Elizabeth Jarret and Ezechiel Pregzt. While he was a prospector, Jed Stone found a golden eagle under the soil of the Mojave Desert. After realizing that there was more gold to be found within the Indian's sacred ground, he brought an army of prospectors and slaughtered the residing Indians. Afterwards, he founded the town of Slaughter Gulch in the Mojave Desert. After years of gold digging, Hutchinson came to him and told him about another mineral, more useful and valuable than gold.

Ignoring the possibilities of any kind of political intervention, Jed hired convicts and quickly turned the ancient temples in an enormous sewage system. To increase his power and the city's economy and transportation, he built a train station. When the Railroad Company arrived, he built a water tank, so they would see that Slaughter Gulch was a real paradise.

On July 5th, 1865, for unknown reasons, Jed Stone and his men lynched one of the Company's representatives and a government agent. This event caused a riot within the prospectors that, led by Tobias MacCarthy, equipped with firearms and explosives, chased Jed Stone's gang to the mountains, where they were in hiding. When dynamite was thrown by one of the prospectors, methane pockets blew up and the mountain collapsed over Jed and his henchmen. No survivors were found by the 7th Cavalry.

Events of Alone in the Dark III[]

Jed Stone appears as the main antagonist in Alone in the Dark III, as well as the final boss. He's the whole reason for Carnby to be in Slaughter Gulch, since he kidnapped Emily Hartwood.

It is revealed that he is finally using the ore to fulfill his plan of starting the Apocalypse by moving the San Andreas Fault, using the radioactive ore he discovered.

He seems to hold a personal grudge for Edward Carnby, although it is not specified whether this is due to Carnby constantly interrupting his plans or if it's because he was responsible for the deaths of his supposed parents in the first two games.

His power armor makes him invincible to bullets and fist fighting. The only way to defeat him is to open the water tap, use the rubber glove and a knife to cut the cable, then head back to the eagle room and wait until he steps in the electrified water. His laser shots deal 2/3/5 damage on easy/normal/hard difficulty, respectively. 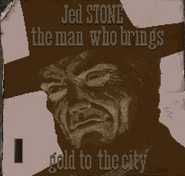 The man who brings gold to the city

Jed's statue with his golden bird
Community content is available under CC-BY-SA unless otherwise noted.
Advertisement