Jim "Lone Miner" Burris is one of Jed Stone's Henchmen. Acting as a minor antagonist in Alone in the Dark 3.

He was probably involved in working with Lefty in smuggling liquor into the cells, as shown in the writing behind a poster in the saloon's cellar. Considering that his bounty used to be $400, he probably committed small crimes, such as burglary or contraband.

It is said that the Lone Miner was so greedy, that he would meet his demise only if shot by golden projectile.

Events of Alone in the Dark 3[]

He is the first mini-boss to be found in the game. He can be found hiding in the Prison rooftops. Upon defeat, he drops a bag full of scorpions.

Lone Miner cannot die for regular bullets, there are two possible ways to kill him: 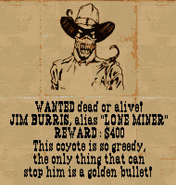 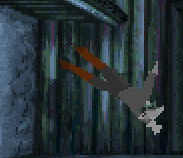