Alone in the Dark Wiki
Register
Don't have an account?
Sign In
Advertisement
in: AITD (2008) stubs, Enemies, Bosses,
and 2 more
English

The Museum Monster was a boss creature in Alone in the Dark that was faced by Edward Carnby in the museum. its appearance included a skeletal humanoid torso and the lower half of a type of insect with talon-like legs. It had the ability to speak.

The monster may have been a physical incarnation of Lucifer.

The Museum Monster appears in the museum of Central Park, facing Edward Carnby when he is looking for Room 943. It threats the detective there will be no mercy for him, and if he is ready to take responsibility for his actions. Edward replies that is his problem, but that now it's time to see how the Monster will beg for mercy. The two engaged in a furious battle, which concludes when Edward defeats and kills the Museum Monster, which, whith a dying roar, falls to the floor.

"It matters not that you are unable to recall your sins, for you there will be no mercy."

"So you assume responsibility for the blood you have shed? Well?"

-The Monster is able to adhere to and climb on the walls, yet it never shows this ability during its boss boss-fight.

-Museum Monster is one of the few creatures, along with the Monster subway and Queen Vampirez, not to vanish in a cloud of black smoke when defeated.

-In the first game of the sketches, the Museum Monster would appear at the Belvedere Castle.

-In the stratgey guide of the game, the Museum monster is called Colossus, but this name it is not confirmed. 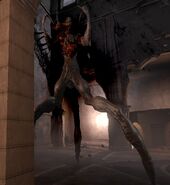