Night Rippers are a subtype of the Creatures of Darkness, which resemble man-sized creatures resembling scorpions with two cadaverous arms and a gaping maw.

Frothing and lumbering with a misshapen and scuttling step, these quadrupeds are a mishmash of body parts—four crab-like legs are fused onto a scaly scorpion body, and two tiny cadaverous arms swing malignantly underneath a gigantic gaping orifice said to be the beast’s head. The beast’s eyes aren’t easily distinguishable—encounters with Night Rippers don’t usually allow time for close inspection. They move swiftly, are extremely strong, and have jaw strength enough to lift a human-sized victim over its head and rip it apart. Face a Night Ripper only if you possess impressive bravery and ordnance.

It was encountered by Edward when he entered the passageway into the gate to the World of Darkness. Like some previous Creatures of Darkness before it, it's appeared as a brief apparation on screen before the real ones appears.

They mostly encountered in the World of Darkness. 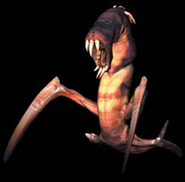 Add a photo to this gallery
Retrieved from "https://aloneinthedark.fandom.com/wiki/Night_Ripper?oldid=22312"
Community content is available under CC-BY-SA unless otherwise noted.