Alone in the Dark Wiki
Register
Don't have an account?
Sign In
Advertisement
in: Cleanup, Split, Characters,
and 8 more
English

Obed Morton is the secondary antagonist of Alone in the Dark: The New Nightmare, as well as the owner of Shadow Island.

Obed Morton comes from a long family line of Mortons that occupied Shadow Island. He has a twin brother, Alan Morton, and he is the son of Howard Morton and Lucy Morton. He is a worldwide famous anthropologist on the subject of the Abkanis Indian tribe that lived on the island. He has written books on the subject and been featured in anthropology magazines. He also translated the Abkanis Tablets with the help of Edenshaw.

Obed Morton was born January 13, 1953, on Shadow Island. He was an overly sensitive child. To protect him, his mother, Lucy Morton sent him on frequent trips to stay with his grandparents in Providence. During his time on the mainland, he developed a deep aversion to the island and for the family home. After his mother became blind and paralyzed after a horseback-riding accident on January 13, 1970, Obed became even more distraught. His maternal grandfather died of a heart attack shortly after learning of Lucy's acci­dent. Scarcely one month later, his grandmother, crushed by the double blow, followed.

Obed and his twin brother Alan were sent to a private boarding school in Boston. Alan continually rebelled against all authority and was expelled from the school before the end of his first year. Obed took refuge in his own imaginary world. He dreaded and feared his trips home. The vacation periods on the island were difficult and painful. He tried to run away several times, but he was not strong-willed enough to complete his flight. Despite this highly unfavorable environment, he was a model student. His grades, always excellent, made him one of the best students in a school whose standards were already high. Yet he could not avoid his family's destiny. He chose to study ancient languages, and without realizing it started out on a path that would lead him straight back to Shadow Island.

Even though Obed was a hard-working and gifted student, his twin brother Alan was always a more capable student. With the support of his grandfather Jeremy, Alan devoured most of the books in the family library. Impressed by his brother's progress, Obed almost subconsciously began inserting the results of Alan's research into his own work. Soon, his pla­giarism became automatic. Obed was regarded as a genius among his colleagues. His "illuminating insights" gave rise to lively. discussions within the field. As Obed's media exposure increased, he revealed his fraud to Alan, so that Alan wouldn't discover it for himself. But Alan didn't care. He simply asked Obed to never betray their family's secrets under any circumstances. He also wanted to receive a portion of the money that Obed's work brought.

For Obed it was the beginning of a whirlwind social life. He was the guest of honor at important seminars. His speaking tal­ent and his convictions brought him success upon success. That's when he met Lamb, who offered him practically unlimited financing as long as Obed gave Lamb exclusive rights to his research. This agreement turned out to be a fatal trap for Obed. During an evening's drinking he admitted to Lamb, inventing yet another lie, that he owed his success to his grandfather Jeremy. He even boasted that he knew where to find the mysterious gateway to the shadows and how to open it. From then on, Lamb would not leave him alone. Obed succumbed to the pressure, returning to Shadow Island, and promising to deliver the transla­tion of the tablets that describes the ritual used to open the gateways.

At one point in his life, he appearently marry Mary Cedrac and they having a child named Aline, but is forced to return to Shadow Island by Lamb, leaving his wife became bitter and strained her relationship with her own daughter. Ultimately, this story is revealed to be a lie conceived by Johnson to manipulate Aline to go to Shadow Island.

Obed is a coward at heart. His twin brother dominates him, as does Lamb, and he gives into both of them. He is psychologi­cally unstable. He has spent his whole life running away: from his family, from Shadow Island, from his responsibilities, and, now, from Lamb and his powerful organization. He knows, however, that he can never escape the one person he wants to most- himself.

Differently by Alan, Obed somehow cares for his family, mainly his mother, and it's implied he also had a good relationship with Edenshaw. By contrast, he strongly dislikes his twin and the Darkness Creatures, and fears them.

Obed remains an intelligent and sensitive man, but he teeters on the verge of sanity. He always realizes the consequences of his actions a little too late.

After he is transformed in a monster, he looks to develops a split personality, with the monster's side being smug and sadistic, while his human side begs Aline to kill him, proving that, despite he retains his intelligence, differently by Alan, he has still lost most of his sanity. He ultimately fullfills a heroic sacrifice against the Darkness Creatures to give Aline enough time to escape, affirming desperately he belongs to light, and not to the Darkness.

Obed Morton is funded by Christopher Lamb, the director of Bureau 713. Alan Morton imprisoned him and experimented on him which turned him into a creature of darkness. Obed Morton appears in this form as the final boss in Aline's storyline where they confront each other on a chasm with Obed on the other side, whom attempt to approach her through a fallen platform that connect between the said chasms. He first appeared when Edward and Aline finally cornered Alan by interfering their confrontation and taking Alan away, mutating him into monster like Obed himself somewhere in World of Drekness.

When Aline confronted Obed again, she was horrified to see the monstrous Obed, and unable to accept it both out of their horrible deeds and his deformation at hands of Alan. This prompt her to fight the former professor, only for the said fight has attracted a swarm of Luxrats, Ophtalmicid that began to swarm her from the other side.

When the earthquake occurs due to them approaching, Aline nearly fell but Obed grab her hand in the nick of time to save her life. As he did so however, the pack of the Creatures of Darkness swarm toward Obed, forcing the latter to prompt Aline to escape. As Obed swarmed by them, he crushed the platform where they stood on, causing all of them to fall to the chasm below. Had he survived the fall, he immediately died due to the falling platform that fell on his already crippled body.

The strategy to defeat Obed relatively simple compared when fighting his brother, as Aline only had to shoot Obed with Grenade Launcher  to keep Obed from approaching her around 12-14. Giving that she automatically lock on Obed(her weapons automatically), the player must shot Obed right when he was locked on so the shots would hits. 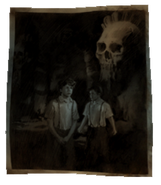 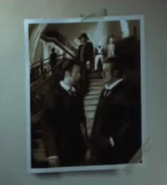 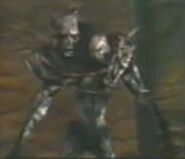