Alone in the Dark Wiki
Register
Don't have an account?
Sign In
Advertisement
in: Creatures of Darkness, Enemies

The Photosaurus is a type of the Creatures of Darkness, which have extremely hard hides. They detest the flashlight and disappear under normal lighting conditions.

Jeremy Morton, patriarch of the hated Morton clan, was the first to encounter these oddly-lolloping, fiendish denizens of the dark. While maliciously testing these creatures, he noted their snapping and chameleon-like tongue attacks, and their detestation of light from any source, including room lighting and flashlights. Their approximate likeness to reptiles, and their sensitivity to light inspired Jeremy to create a descriptive name: the Photosaurus (“photo” from the Greek root meaning “derived from light” and “saurus” from the Greek root meaning “lizard” or “reptile”). Abkanis Indian legend also speaks of an enormous nest of Photosaurus eggs hidden in the deepest reaches of the island’s interconnecting tunnels. 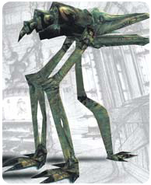