The Vampirez nest, created and inhabited by a multitude of these creatures, was a boss Alone in the Dark (2008) and its remake, Alone in the Dark: Inferno. It does not appear in the PS2 and Wii versions.

The nest is created presumably by a Queen Vampirez where calves its young. E 'consists of resistant and pointed appendages that defend a core made ​​of more vulnerable fleshy membrane. The Vampirz live there and take you to the captured prey to lock them up in bumps from which suck blood. Creatures defend the nest if it is threatened, rising in the air above it as thinking and throwing objects at the enemy.

The core of the nest is its vulnerable part. Since the fire its weak point, as with any other creature generated by Fissures, you need to launch yourself into the explosive to destroy it. During the boss-fight we must stay away from the flock of Vampirz to defend the core that will lift heavy objects to throw at Carnby . The area will be filled with alcohol and petrol bottles to be collected and thrown to the base of the nest, however, we must absolutely not get too close or you will be eaten by Vampirz. Create explosives with fuses will walk away with more security from reprisals of the creatures. After four or five explosions nest explode. 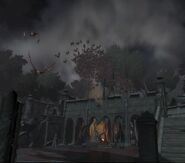 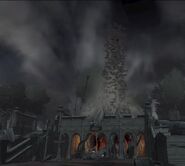 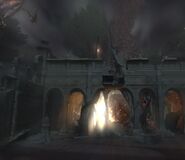 The nucleus of the nest

Destruction of the nest

Concept Art
Add a photo to this gallery

Retrieved from "https://aloneinthedark.fandom.com/wiki/Vampirez_Nest?oldid=18680"
Community content is available under CC-BY-SA unless otherwise noted.